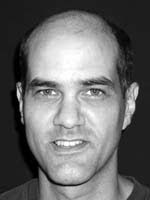 Bob Hicok was born in 1960. His most recent collection, This Clumsy Living (University of Pittsburgh Press, 2007), was awarded the 2008 Bobbitt Prize from the Library of Congress. His other books are Insomnia Diary (Pitt, 2004), Animal Soul(Invisible Cities Press, 2001),a finalist for the National Book Critics Circle Award, Plus Shipping (BOA, 1998), and The Legend of Light (University of Wisconsin, 1995), which received the Felix Pollak Prize in Poetry and was named a 1997 ALA Booklist Notable Book of the Year. A recipient of three Pushcart Prizes, Guggenheim and two NEA Fellowships, his poetry has been selected for inclusion in five volumes of Best American Poetry. Hicok has worked as an automotive die designer and a computer system administrator, and is currently an Associate Professor of English at Virginia Tech in Blacksburg. A new collection, Words for Empty and Words for Full, is forthcoming this year from University of Pittsburgh Press.

Reading a used book on evolution I wonder
about fingerprints, how long they live.
Were the fingers licked before the pages
were turned, did the owner
of the book, of the fingerprints
read in the bathroom, will there be a hair
on page 231, on a train, did he take the C
uptown, did she eat lunch with pigeons
and hold the book open with her foot
as she sat cross-legged on the lawn
of the Municipal Building, a short hair,
curly and black or blond and straight
and long as my finger? Was she reading
instead of getting her license on the day
she’d promised to, after five months
of dreading the DMV, instead
of looking into the bill for lab tests,
one hundred and seventy seven dollars
to peek into her blood, her urine,
instead of calling the furnace guy
and dealing with his boots on the carpet,
with his mouth moving in front of hers,
with the expectation of small talk,
did the book keep her from visiting
her mother and asking about MS,
did he hold the book between his face
and his wife, is it how he asked
for a divorce, by not speaking, by saying
the name Leaky over and over to himself,
by letting the pages stand in for his face?
Will I become everyone who reads this book,
did their eyes change the letters,
is reading a sexual act, is there congress
between the text and my gaze,
is there no mirror left me but words,
why am I afraid of people, why do I talk
behind them to the edge of their shadows,
why did the continents drift, why didn’t
the thumb stay put, is fear what it means
to be human, am I what it means to be human,
why did the brain ransom the heart
to the mouth, why did we ever come down
from the trees?

January 18, 2004. I’d been reading the night before and thought that I might turn the page and find a hair there. So the poem began with that basic idea.

I have just one computer file for it, so it was likely written straight through and not changed.

I believe I don’t know, on an intimate level, how I arrive at the choices I make. I can’t see my brain function. So even with simple things – what kind of Ben and Jerry’s do I want? – I’m not capable of articulating exactly how the decision was reached. (Though of course, Cinnamon Buns is the way to go.) I sometimes feel poets do themselves a disservice when they speak of inspiration, as if they’re merely vehicles, typists with MFAs. Inspiration, for me, is a matter of being open to the ideas my mind offers up. Why always sweat and tears, by the way? Why not puss and blood? I suppose because that’s really gross.

I’m not sure. No rules. I’ve sent poems out the same day I wrote them, and have poems I like – that I think work – that I’ll never send out.

Well, besides the questions, which are sincere, are factual, there are no facts here. But for the poem to work, I think, the situations I mention have to seem real, or possible. They have to operate as facts or potential facts.

In that it tells the story of what I was thinking while I wrote, yes. That’s the only story it tells.

Of course you mean poets. Poets always mean poets when they ask that question. I don’t recall who I was reading at the time, or if I was reading. I like reading TV, to be honest. It turns the pages for you. When I was learning to write I didn’t read poetry, so influence is hard for me to sort through. Don DeLillo and Saul Bellow were important to me. Their energy and reach. Now, I read a lot and like a lot of what I read, but it changes. I think it’s a good time to be a poet, and a reader of poetry. The field seems wide open.

I never think about people reading these. It feels presumptive, on the one hand, creepy on the other, and to have three hands for a moment, impossible on the other other hand. Impossible to think my way through another mind encountering my poems. I really don’t want to deal with another opinion while writing, or even after. My thoughts, feelings, mistakes.

Well, there was just the one version. I probably showed that to my wife, Eve.

That it was written by an American.

This poem was written.
Posted by Brian Brodeur at 4:04 PM