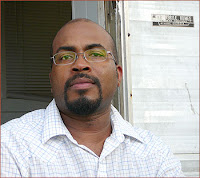 Born and raised in Milledgeville, Georgia, Sean Hill has an M.F.A. from the University of Houston, where he was awarded the 2003 Michener Fellowship for poetry. He has also received fellowships from Cave Canem, the Bush Foundation, The MacDowell Colony, the University of Wisconsin, and Stanford University, work-study scholarships to Bread Loaf Writers' Conference, and a Travel and Study Grant from the Jerome Foundation. His poems have appeared or are forthcoming in Callaloo, Ploughshares, Pleiades, Crab Orchard Review, DIAGRAM, The Oxford American, Tin House and other literary journals, and in the anthologies Blues Poems, Gathering Ground, The Ringing Ear, and the forthcoming Black Nature: Four Centuries of African American Nature Poetry. In 2008 the University of Georgia Press published his first book, Blood Ties & Brown Liquor. For more information, please visit Hill's website.

Uncle John stole a ham
from Mr. Ennis’s Meat Market
He was seventeen

Lost his taste for it
locked up
fourteen years

The idea of this poem, the trigger, was a newspaper article I came across while doing research for Blood Ties & Brown Liquor. I read 19th and early 20th century issues of Milledgeville’s newspaper, the Union Recorder, to get a sense of how people lived in my hometown back then—to get a sense of the texture of the times. This particular article was published sometime in 1904, I think. This was during the era of leased convict labor when the state could lease convicts to privately owned businesses. This system offered a source of revenue for the state and cheap labor for businesses. Very often Black men were arrested and convicted on trumped up charges. The article related the story of a recently released convict who’d been sentenced to work for twenty years in, I believe, a coal mine for stealing a ham. The happy ending spin the article put on this situation was that the man was now free to pursue his dream of starting up a farm. I think I read the article sometime in late 1999 or early 2000. I couldn’t shake this story. The nagging question of “and then what?” needed answering, so I wrote my way to an answer. I wrote the first drafts of it at the Cave Canem workshop and retreat in June 2000.

I think because the story was with me for a while before I actually tried to write anything on paper, it went through very few drafts over a few months. I checked my computer files, and I seem to have saved only two drafts before the final. I’m sure there were a few more that were printed out but not saved on the computer.

I do believe in inspiration; it’s what stops me, pulls me out of the everyday. Those moments of attentiveness are often something coming to me and saying, “pay attention.” A great part of “Uncle John” was “received,” but, as I said, only after I’d sat with the material for a while. The lines “Lost his taste for all things salt / the ocean he hasn’t seen / woman and man” definitely felt “received” from a place farther out than the rest of the poem. Those lines, especially “the ocean he hasn’t seen,” surprised me more than the rest of the poem, which surprised me too. I think I put myself in a place to “receive” this poem. Then I cried and sweated.

In looking back at the drafts I have, it seems I tried to write it in tercets, but that didn’t work out. The poem, the voice, resisted that, and I listened.

I don’t have any hard and fast rules for lengths of time to let poems “sit” before sending them out. It’s intuitive—dependent upon how I’m feeling about the poem.

The facts of the poem are what I gathered from the newspaper article: a Black man was sentenced to twenty years hard labor for stealing a ham, and he was made to serve sixteen of those twenty years, and, allegedly, he was going to start a farm after his release. Those facts along with the facts I gleaned from history books and growing up Black in Milledgeville in the last quarter of the twentieth century and hearing older generations of Black people speak about their lives and, as an adult, asking them questions and listening to their answers are the facts of this poem. The brief rhapsodic ham reverie came from fond childhood memories of having country cured ham for breakfast at my grandmother’s house and from the fact that by the time I was writing those lines I hadn’t eaten pork for close to ten years. My empathic imagining of the voice of the relative of Uncle John who understands what John has lived through and lives with filled in the rest.

It’s narrative in that it relates a sequence of events. It has, I think, the structure and, possibly, punch of a joke. And if the reader is laughing, I think he or she is laughing to keep from crying.

I’m not really sure what I was reading around this time, but it’s probably safe to say I was reading Rita Dove, Yusef Komunyakaa, Marilyn Nelson, Sterling Brown, Seamus Heaney, and Kevin Young.

No and yes. I think the consideration of audience, for me, comes in during the revision process when I’m thinking of the best order for the words. I start thinking more consciously about how the words can mean to someone encountering them for the first time, a reader.

Yes. As I said, I wrote the first drafts at Cave Canem and turned in a version to workshop there. And in fall semester of 2000 I turned in a draft to Robert Phillips’s workshop at the University of Houston. A question about something that I saw as obvious or irrelevant or both was raised by Professor Phillips, I believe; the question was, why did he steal the ham? I guess that’s where audience comes in.

Well, I think it employs humor in a way that most of my other poems haven’t.

I think it was finished.
Posted by Brian Brodeur at 2:44 PM