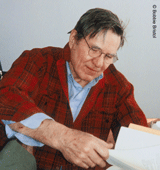 Galway Kinnell was born in Providence, Rhode Island, on February 1, 1927. He has published several volumes of poetry, including Strong Is Your Hold (Houghton Mifflin, 2006); A New Selected Poems (2000), a finalist for the National Book Award; Imperfect Thirst (1996); When One Has Lived a Long Time Alone (1990); Selected Poems (1980), for which he received both the Pulitzer Prize and the National Book Award; and Mortal Acts, Mortal Words (1980). Kinnell’s honors include a MacArthur Fellowship, a Rockefeller Grant, the 1974 Shelley Prize of the Poetry Society of America, and the 1975 Medal of Merit from National Institute of Arts and Letters. He has served as poet-in-residence at numerous colleges and universities, including the University of California at Irvine, Columbia University, Sarah Lawrence, and Brandeis, and divides his time between Vermont and New York City, where he was the Erich Maria Remarque Professor of Creative Writing at New York University.

Here on the hill behind the house,
we sit with our feet up on the edge
of the eight-by-ten stone slab
that was once the floor of the cow pass
that the cows used, getting from one pasture
to the other without setting a hoof
on the dirt road lying between them.

From here we can see the blackberry thicket,
the maple sapling the moose slashed
with his cutting teeth, turning it
scarlet too early, the bluebird boxes
flown from now, the one tree left
of the ancient orchard popped out
all over with saffron and rosy,
subacid pie apples, smaller crabs grafted
with scions of old varieties, Freedom,
Sops-of-Wine, Wolf River, and trees
we put in ourselves, dotted with red lumps.

We speak in whispers: fifty feet away,
under a red spruce, a yearling bear
lolls on its belly eating clover.
Abruptly it sits up. Did I touch my wine glass
to the table, setting it humming?
The bear peers about with the bleary undressedness
of old people who have mislaid their eyeglasses.
It ups its muzzle and sniffs. It fixes us,
whirls, and plunges into the woods—
a few cracklings and shatterings, and all is still.

As often happens, we find ourselves
thinking similar thoughts, this time of a friend
who lives to the south of that row of peaks
burnt yellow in the sunset. About now,
he will be paying his daily visit to her grave,
reading by heart the words, cut into black granite,
that she had written for him, when they
both thought he would die first:
I BELIEVE IN THE MIRACLES OF ART BUT WHAT
PRODIGY WILL KEEP YOU SAFE BESIDE ME.
Or is he back by now, in his half-empty house,
talking in ink to a piece of paper?

I, who so often used to wish to float free
of earth, now with all my being want to stay,
to climb with you on other evenings to this stone,
maybe finding a bear, or a coyote, like
the one who, at dusk, a week ago, passed
in his scissorish gait ten feet from where we sat—
this earth we attach ourselves to so fiercely,
like scions of Sheffield Seek-No-Furthers
grafted for our lifetimes onto paradise root-stock.

This I don’t remember.

Yes. It was all received, but all soaked in sweat and tears.

Six months, with some tweaking in the galleys.

Seeing a poem in galleys hastens finishing it.

All of it is fact, with a coating of imagination.

I don’t normally write for a particular audience.

I send most of my poems to trusted friends, before sending them to magazines.

It feels very heavy. It is in bondage to narrative, familiar surfaces, and an expected outcome, a poem composed on earth.

Only that wild animals pop up.

It was finished and then abandoned.
Posted by Brian Brodeur at 9:13 AM