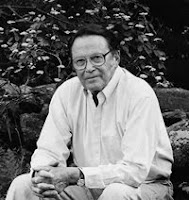 Richard Wilbur, poet and translator, is one of the preeminent men of letters of our time. He has served as poet laureate of the United States, and his many other honors include a National Book Award, two Pulitzer Prizes, and the Bollingen Translation Prize. His most recent book is Collected Poems: 1943 – 2004 (Harcourt, 2004). Wilbur lives in Cummington, Massachusetts, and Key West, Florida.

She is going back, these days, to the great stories
That charmed her younger mind. A shaded light
Shines on the nape half-shadowed by her curls,
And a page turns now with a scuffing sound.
Onward they come again, the orphans reaching
For a first handhold in a stony world,
The young provincials who at last look down
On the city’s maze, and will descend into it,
The serious girl, once more, who would live nobly,
The sly one who aspires to marry so,
The young man bent on glory, and that other
Who seeks a burden. Knowing as she does
What will become of them in bloody field
Or Tuscan garden, it may be that at times
She sees their first and final selves at once,
As a god might to whom all time is now.
Or, having lived so much herself, perhaps
She meets them this time with a wiser eye,
Noting that Julien’s calculating head
Is from the first too severed from his heart.
But the true wonder of it is that she,
For all that she may know of consequences,
Still turns enchanted to the next bright page
Like some Natasha in the ballroom door—
Caught in the flow of things wherever bound,
The blind delight of being, ready still
To enter life on life and see them through.

“The Reader” was composed at some time between 2000 and 2004, and first published in The New Yorker. My late wife was always a great reader and re-reader of classic fiction—not for scholarly purposes, but for the delight of it.

Though I do quite a bit of crossing out, and a great deal of hesitating, my poems are commonly written in a single draft, and over a period of days.

Yes, I believe in inspiration. Love and admiration underlay the poem, but what got it going was a sense of how discourse might marshal a number of things: the sight of her, some great themes and persons of the nineteenth century novel, some conjectures as to how it was for her to visit Dorothea or Isabel or Stavrogin yet again.

I felt from the beginning that an unrhymed pentameter—having if possible the vigor and variation which I admire in Milton—would be the right form for such discourse.

If a poem has been botched, I throw it out; otherwise I type it out and send it away, hoping for approval.

The poem ends by blending my wife’s delight in fiction and her undiminished love of life.

No, it’s not a narrative.

I think that, after many decades of reading and writing, one has many gratitudes and admirations, but is not likely to succumb to some influence.

I think I write for a blend of persons, living and dead, whom I would like to interest and please and move. But those persons don’t constitute an exclusive club. I hope to be accessible and human.

My wife was always my first and best judge, but what I showed her—save in the case of translations—was the completed work. Now I do the same with one or two good friends.

Robert Frost, when asked why he wrote poems, used to say (evasively) “to make them all different from each other.” I trust that this poem differs.

American? Well, it makes use of our supremely resourceful language.

Finished.
Posted by Brian Brodeur at 11:51 AM