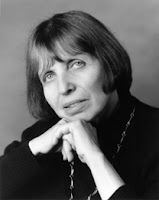 Linda Pastan was born to a Jewish family in the Bronx in 1932. She graduated from Radcliffe College and received an M.A. from Brandeis University. She is the author of Queen of a Rainy Country (W. W. Norton, 2006); The Last Uncle (2002); Carnival Evening: New and Selected Poems 1968-1998 (1998), which was nominated for the National Book Award; An Early Afterlife (l995); Heroes In Disguise (1991), The Imperfect Paradise (1988), a nominee for the Los Angeles Times Book Prize; PM/AM: New and Selected Poems (l982), which was nominated for the National Book Award; and The Five Stages of Grief (1978), among others. From 1991 to 1995, Pastan served as the Poet Laureate of Maryland, and was among the staff of the Breadloaf Writers Conference for twenty years. Linda Pastan lives in Potomac, Maryland.

Sometimes I think all the best poems
have been written already,
and no one has time to read them,
so why try to write more?

At other times though,
I remember how one flower
in a meadow already full of flowers
somehow adds to the general fireworks effect

as you get to the top of a hill
in Colorado, say, in high summer
and just look down at all that brimming color.
I also try to convince myself

that the smallest note of the smallest
instrument in the band,
the triangle for instance,
is important to the conductor

who stands there, pointing his finger
in the direction of the percussions,
demanding that one silvery ping.
And I decide not to stop trying,

at least not for a while, though in truth
I'd rather just sit here reading
how someone else has been acquainted
with the night already, and perfectly.

I don’t remember when, but I know I was actually rereading “I Have Been One Acquainted with the Night.”

All my poems go through dozens of revisions, usually over a period of weeks.

Only the ending was “received,” as you put it. The rest is always sweat and tears—even blood.

I always experiment with line lengths and stanzas—the computer makes this relatively easy. My only principle is that it seems right.

Several months, if I recall.

I try to wait at least a month so I can read it again with fresh eyes before sending it off.

There is some movement over time. Does that make it a narrative poem?

Obviously I was reading Frost. Does love imply influence?

My daughter Rachel, a novelist, is usually my first reader and critic. And I often share work with poet friends around Washington, DC.

This one was finished!
Posted by Brian Brodeur at 11:59 AM