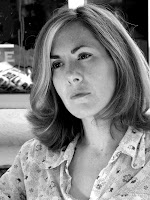 Erin Belieu was born and raised in Nebraska and educated at the University of Nebraska, The Ohio State University, and Boston University. A former editor at AGNI, she currently serves as a contributing editor to The Kenyon Review. She has taught at Washington University, Boston University, Kenyon College, and Ohio University. Belieu is the author of three poetry collections, all published by Copper Canyon Press: Black Box (2007); One Above & One Below (2000); and Infanta (1995), which was selected for the National Poetry Series. Belieu currently teaches in the English Department at Florida State University.


LAST TRIP TO THE ISLAND

You're mad that I can't love the ocean,

but I've come to this world landlocked
and some bodies feel permanently strange.
Like any foreign language, study it too late and
it never sticks. Anyway,

breathing made more unnerving by
the presence of all these families, the toddlers

with their chapped bottoms, the fathers
in gigantic trunks spreading out their dopey
circus-colored gear.

How can anyone relax
near something so worked up all the time?

I know the ocean is glamorous,
but the hypnosis, the dilated pull of it, feels

impossible to resist. And what better reason to
resist? I'm most comfortable in

a field, a yellow-eared patch
of cereal, whose quiet rustling argues for
the underrated valor of discretion.

And above this, I admire a certain quality of
sky, like an older woman who wears her jewels with
an air of distance, that is, lightly,
with the right attitude. Unlike your ocean,

there's nothing sneaky about a field. I like their
ugly-girl frankness. I like that, sitting in the dirt,

I can hear what's coming between the stalks.

I think I wrote it in early 2006 when I was working on the poems for my last book, Black Box. It was one of the first ones to come for that book.

This was an odd one in that I usually go through many (possibly too many) revisions of a poem and it takes months and months—sometimes years—to eke out anything, but in this case Doug Powell got a hold of me and kindly asked if I had anything for him to publish in The Electronic Poetry Review. I’m not a very prolific writer--I didn’t have much to show him--still I didn’t want to miss the opportunity as I really admired what Doug was doing there. So I kind of sheepishly sent “Last Trip to the Island,” which was only in its third or fourth draft, and said, “Hey, you know, this probably isn’t finished and you may not want it, etc. etc.” And Doug wrote back something like “What are you talking about, you idiot? I think it’s terrific…” And then he writes this brilliant explication of the poem and why he thinks it’s well done and by the time I was finished reading what he’d written I decided maybe it wasn’t so hopelessly pointless after all. Marie Ponsot once told me years ago “Erin, you really need to lower your expectations” but I still struggle a lot with this self-sense of nothing ever being good enough. And pretending to be exacting is also a handy way of masking my inherent slothfulness.

I do believe in inspiration, but really, inspiration and $1.50 is worth a cup of coffee. Everybody’s inspired, aren’t they? It’s getting it on the page where the ditch digging begins. So I carried around this idea about how I wanted to write a poem about how much I mistrust the ocean and how uncomfortable I feel when I go to the beach—any redheaded freckled people who might be reading this know what I’m talking about—and it took some years before the notion gelled with a scene and point-of-view and argument. That vague idea needed an occasion and a stance. So ideas are like asses: everybody has one. I guess I think all the various elements have to gather together and you almost always have to sweat for those. Sometimes you win the poem lottery, but for me the muse doesn’t hand out the free samples very often.

Again, I’m not certain that it did arrive at its final form. I’m very much a sculptor with my poems, even when my poems appear to approximate narrative, free verse voice as some of them do, and this one came out a little bit too loose for my tastes. But other people liked it and I’ve finally learned when I get that lucky to say “Oh, good!” and shut my cake hole.

I have to admit that I don’t often send my poems into the world. I’m really not trying to sound repulsively self-deprecating, but I’m under no delusion that the world can’t sleep without the next Erin Belieu poem. Plus I react very badly to rejection. Back years ago when I did try and send out a few things, the first time I got rejected I nearly beat the mailbox to death. Seriously, I kicked it till the post broke. And I’m pretty sure that’s a felony. Anyway, I’m in the ludicrously lucky position to sometimes have editors ask me for things and then I send them along. Better for everyone involved. But I do suspect that people write and send and publish too much generally. I remember Edith Wharton describing a powerful New York society couple—Mr. and Mrs. van der Luyden—in her novel The Age of Innocence. When one character asks why these two—who are neither particularly fascinating nor entertaining—wield so much influence over the social scene, another character responds by saying “they make themselves valuable by making themselves rare.” I may be paraphrasing slightly, but I think the point is a useful one.

I could talk about it and I completely understand why you ask—it’s a fair question—but honestly I’m sick to death of discussing the supposedly biographical elements in poetry. Even if themes or images originally spring in some way from the biographical, any poem worth reading moves beyond that quickly. I mean, I know that Hardy had a miserable relationship with his first wife, but I didn’t know that when I first fell in love with his poems and knowing this doesn’t add anything to them. “The Voice” is an incredibly powerful portrait of grief without this “fact.” My persistent fear is that reality television and celebrity blogs and all that delicious but nutritionally void garbage are completely devaluing acts of imagination in every form. I hate those “based on a true story” stickers they put on books now. I think we all need to take the pledge to stop caring about what the facts are and just be hopeful for something imagined that truly moves us. On my next book I’m putting stickers on them that say, “based on an imagined story.”

Yes, I suppose so. A lyric-narrative, technically speaking.

I think I was reading Josh Bell and Marina Tsvetaeva. Man, that’ll give you a nosebleed! But in the good way…

I have a little posse who’ve been generous enough to give me feedback over the years—Carl Phillips, Susan Aizenberg, Mark Bibbins, Josh Bell, Kay Horwath. Very good souls. Couldn’t do without them. And my best and toughest critic is my partner, Adam Boles, who’s a wonderfully mean editor. Really, I just picked him for his looks, but then he turns out to be brilliant. Go figure. So he wrestles with me whenever I shout, “I’m done!” Then I snarl at him, tell him he doesn’t understand my genius and stomp back to my desk to try and fix what he was talking about. He’s almost always right. Very annoying. But unlike the mailbox, I never kick him.

I guess it seems pretty much like a typical Belieu specimen—oppositional, contrary, hopefully amusing in some black humored way. It doesn’t have any dirty words in it, though. That’s strange.

What an interesting question. Well, its currency privileges the image, so I suppose that distinguishes it from what my friends are doing in Britain where the focus is still more often pointed at music. And it has bad manners but a big heart.