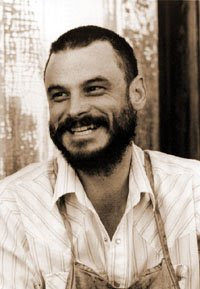 Steve Scafidi is the author of Sparks from a Nine-Pound Hammer (2001) and For Love of Common Words (2006), both from LSU Press. Although sometimes he teaches poetry at Johns Hopkins University, mostly he works as a cabinet maker. He lives with his family in West Virginia.


TO WHOEVER SET MY TRUCK ON FIRE

But let us be friends awhile and understand our differences
are small and that they float like dust in sunny rooms
and let us settle into the good work of being strangers
simply who have something to say in the middle of the night
for you have said something that interests me—something of flames,

footsteps and the hard heavy charge of an engine gunning away
into the June cool of four in the morning here in West Virginia
where last night I woke to the sound of a door slamming,
five or six fading footsteps, and through the window saw
my impossible truck bright orange like a maverick sun and

burning in my truck, you bastard, you watched as I sprayed
finally the flames with a gardenhose under the moon
and yes I cut what was surely a ridiculous figure there
and worsened it later that morning after the bored police
drove home lazily and I stalked the road in front of my house

you were miles away and I, like the woodsman of fairy tales,
threatened all with my bright ax shining with the evil
joy of vengeance and mad hunger to bring harm—heavy
harm—to the coward who did this and if I find you,
my friend, I promise you I will lay the sharp blade deep

into your body until the humid grabbing hands of what must be
death have mercy and take you away from the constant
murderous swinging my mind makes my words make
swinging down on your body and may your children
weep a thousand tears at your small and bewildered grave.

This poem started just after someone set my truck on fire late one night in June of 1999. I hid in the bushes with an axe for three nights waiting for the person to return. He didn’t return and I needed to get on with my life so I started this poem and wrote it rather quickly.

After I wrote the first draft I was able to sleep inside my house again and so I pinned the draft to my wall—which was an old practice of mine—and looked at it and tinkered away for a few weeks. The emotion of the poem appears, as is, in my first draft. It was a useful poem to write in that I wanted to murder someone and the poem—and the urge to write one—saved me from stupidity. It may not be a good poem or a poem at all but I am grateful to it. The Southern Review published it in 2000.

The blank page is about the only holy place I understand. I think all writing is inspired—even the worst. It has to come from somewhere and I don’t know exactly where any of it comes from. I do know that it appears on the page suddenly and I am astonished at that fact. It is like getting a note written in invisible ink—there is something mysterious and secret about a first draft and all the subsequent drafts just deepen my surprise. I think we study and read and cultivate our instincts as poets but we also live in a state of bewilderment that makes poems possible.

I didn’t consciously do anything to write this poem except to make myself as clear as possible. There is no invention here. Everything happened as I say in the poem. It is probably more of a letter than a poem anyway and that is OK with me. A letter has purpose and magic.

How long after you finished this poem did it appear in print? How long do you let a poem “sit” before you send it off into the world? Do you have any rules about this or does your practice vary with every poem?

I put this poem aside for a couple of years and sent it out when my first book was accepted by LSU Press. I don’t have a lot of time so I’d rather read a poem or write a poem than mail one out. Sometimes I write a thing and get anxious to mail it to a journal but that rarely happens anymore. I let poems sit a long time now. I used to believe that if you did good work as a writer then that work would inevitably find its way in the world. I still have this faith secretly but it is chastened by the forces of luck and caprice and circumstance. The literary world is often stupid but the writing life has genius in it. I’ve published work I’m proud of and I’ve published work I am embarrassed by and it takes me years to know the difference so I’ve decided to be patient.

There is no fiction here. In fact what happened next was I drove to work—the truck was burnt but I could still drive it—worked all day, and then ran an errand with a friend. The errand went awry and we found ourselves stranded in Winchester, Virginia standing on a street corner for two hours shouting and laughing at passing cars and when I finally got home near dark I found a huge peacock standing in my yard which I chased up an oak tree where it screamed and hollered all night. All of this is true. This was one of those days that will make you write poems if you hadn’t tried before. I believe in the truth of fiction and most of my poems rely on invention but this poem is plain reporting.

Did you ever find the guy?

If the poem hasn’t found him by now I know it is hunting for him in the empyrean. He might wake from a dream soon and be afraid. It is a hound of hell.

This poem explores a complex range of emotions: paranoia, humility, irony (“my friend”), fear, complaint, murderous rage. Could you briefly address the flexible tone of this poem?

The tone does change dramatically from the first line to the last. The storyteller gets caught up in the emotion of the thing and loses all tact and decorum and drops into violence. It is a picture of someone losing their shit. The joy of this, for me, is that it happens in real time. I think the poem captures a moment of temporary insanity that we are all familiar with but rarely like to acknowledge. It is madness. It intimidates and delights me.

I think of the men and women I work with when I write. I think of the poets who are my friends. I think of my family. I imagine my audience consists entirely of people I know. So I am always amazed and delighted to hear from a stranger. I am always astonished to know that the world exists and is larger than my small circle.

I like this question mostly because I don’t know how to answer it. The speaker of this poem is a malevolent, two-faced nut. He is blood thirsty and just about out of control. There is no happy cleansing of the emotion, no calm tsk-tsk-ing of an inner voice, no moral at the end. I love the poems of Ted Hughes, an Englishman, and of Federico Lorca, a Spaniard, and they both wrote poems seeking the duende, or the ur-life of the body. This poem looks for blood which it confuses for justice. I don’t know if any of this is American. According to Achilles and Hamlet and Hollywood and every newspaper published today murderousness is alive and well most anytime and anywhere you turn. Perhaps the sloppiness of the poem is American but that doesn’t seem fair. I’ll take the blame for that.

Did you let anyone see drafts of this poem before you finished it? Is there an individual or a group with whom you regularly share work?

I kept this poem to myself but I do have a group of old friends and new friends whom I rely on for advice. I am supremely grateful to these readers for their insight and encouragement. I usually wait until I have a manuscript of 50 or so poems and then send it to them with a list of questions. They send me work too and it is always a delight and a privilege.

It seems a natural part of what I am interested in as a poet which is power. And helplessness. I am fascinated by what I cannot control or understand and that is most things--I love all the forces of nature that make up an ordinary life. They look like love and rage and death and sex and rivers and whatever happens in the springtime and whatever is going on in the sky. I like my place in all of this—a place transformed by all of these forces, a place of bewilderment. For the last two years I have been writing a biography of Abraham Lincoln in one poem after another. His life seems just such a swirling place. His life, like ours, is informed by circumstance and forces beyond any individual control and yet he navigated them with real cunning and grace. For a while. And then those forces overwhelmed him and he was gone. Isn’t this our fate? And yet, he seems alive and well today in the same way that poems defy impossibility. In poems the dead rise up and walk and our lives sparkle with clarity, even beauty.

The purpose of that poem was to get me back into the house and to my senses and it worked. So it is finished.
Posted by Brian Brodeur at 3:10 PM